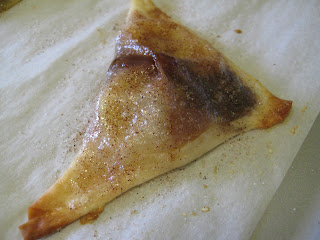 I was totally planning on making these sooner than tonight, but with company in town this weekend, it just didn't happen.  Unlike Lisa, I wasn't quite as excited to make these.  For some reason, they didn't sound quite as appealing, and I was worried that the assembly would be difficult.  As it turns out, I was surprised by the outcome.

First of all I was worried about finding the wonton wrappers.  I fioud them at the second store I tried in the produce department of all places.  The actual assembly was a lot easier than I expected.  I have to admit though, I only made four of the wontons.  But that is what I liked about this recipe.  It was easy to make as many or as few of them as you wanted.  I have cinnamon-sugar mixed up in a shaker, so I used that rather than measuring them out as stated in the recipe.

I baked them for 10 minutes and let them cool for a couple before eating them.  They tasted better than I expected.  The hubby tried them and said that while he wasn't a fan of cooked banana, he thought they would be good with something else.  I suggested strawberries and he was immediately excited about that prospect!

I do plan on making these again, and since strawberry season is right around the corner, I am going to try it with those instead.  I can't wait till my son is older, because as Beth suggested in the book, this is definitely a great recipe to have kids help make. 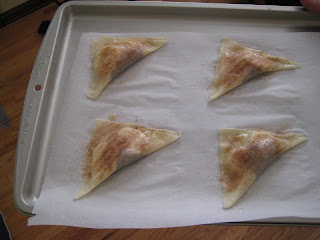 Wontons before baking
Posted by Summer at 8:54 PM