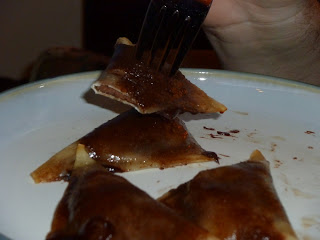 I really don't think you can ever go wrong with Nutella anything. :) Of course when I spotted this recipe, I knew I'd be excited about making it!

In shopping for the (very few) ingredients I needed, I was a little apprehensive about finding the wonton wrappers. But my worry was in vain as they were at the first store I tried! The only tricky thing is that they were located in the "natural" food cooler with all the gluten-free/tofu/super-organic items. I never would've thought to look there. :P

Generally speaking, this is a VERY simple recipe. It's more of an assembly process than anything else. But it is a bit time consuming. I ended up with 17 wontons (that simultaneously filled the pan and used up one banana), but it took me a good 30-45 min to put them together. I never did really figure out quite the right method for placing the filling on the wrapper, but it certainly didn't hurt the end product. 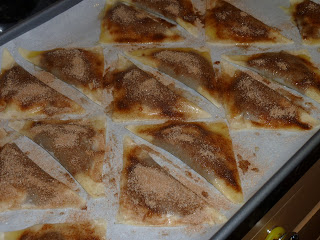 They were supposed to bake for 8-10 min, but I wound up baking them for about 2.5 min longer to try and get them a little more browned. I'm not sure if I over baked them or not, but they weren't quite as crisp as I'd expected. The wrappers were kind of a hard chewy texture. But the mix of cinnamon sugar with the butter combined with the filling was super yummy!!! I wasted no time in gobbling up four of them! I can also totally see why these need to be consumed very shortly after coming out of the oven! :) 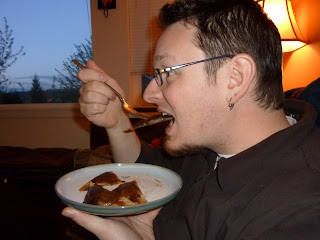 I've still got more wonton wrappers, bananas and Nutella, so I'll probably make some more this weekend. Maybe I'll change they baking time a little and see what happens. :)
Posted by LisaD at 10:44 PM