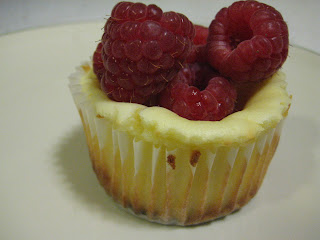 I was excited to make these cupcakes for a number of reasons.
This Sunday when I was grocery shopping, I couldn't find the gingersnap cookies that this recipe called for.  I was pretty annoyed and was going to settle and make them with Nilla Wafers.  But I went back to the store today and found gingersnaps - yay!  This was hands down the easiest crust to make - just plop a gingersnap into a paper cupcake holder!

I was very impressed with myself that I remembered to look at the recipe ahead of time to see which ingredients needed to be left out at room temperature.  The only thing that really worried me about this recipe was to not over-incorporate everything.  This is how they looked before I put them in the oven: 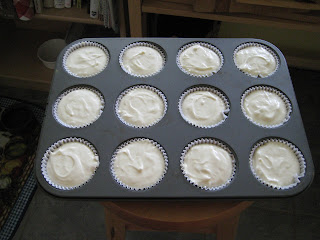 I took them out after 25 minutes.  I almost let them cook for another 2 minutes because they weren't brown or anything.  But I reread the recipe and they were definitely set and puffy on top.  It also stated that they will sink a little bit after taking them out of the oven.  Here's what happened to mine: 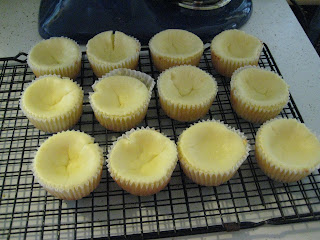 I think I might have done something wrong.  Did I over beat them?  Did they bake too long?  Not sure, but they taste pretty good.  And you can fill the middle with raspberries to hide the sunken tops!  I was a little worried that the gingersnaps might overpower the cheesecake, but it didn't at all.  I am bummed that they sank so much, but I would definitely make these again!
Posted by Summer at 8:57 PM