I have to admit that one of the sole reasons for picking this recipe when I did was the cornflakes!  I had leftover cornflakes from the Butterscotch Bites, so I figured why not use them up now while they are fresh.

The recipe itself is actually quite simple.  It calls for egg noodles, which I also happened to have handy (nothing like cleaning out your pantry!)  The pudding part is made up of cream cheese, sugar, eggs, milk and apricot nectar.  Wouldn't you know the first store I tried to find the nectar only had peach and pear?!  You would think I live in some small town in the middle of nowhere with all the of issues that I have had trying to find ingredients!

There were a few steps involved with this recipe, like cooking the noodles and prepping the topping, but over all it was easy.  Mine baked for about 56 minutes.  It smelled so good because the topping has the crushed cornflakes with cinnamon and sugar. 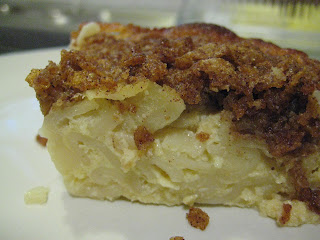 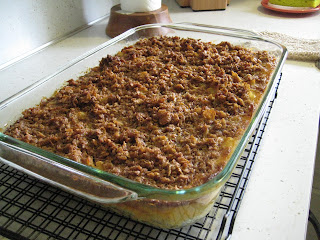 The taste of this noodle pudding was ok.  I have never had a noodle pudding before and the texture was a bit odd.  It's hard for me to think of this as a dessert.  I did try it at room temperature, but tomorrow I plan on trying it chilled.

Some bad news that I have to share this week is that I am no longer consuming dairy in my diet.  This is due to the fact that it simply doesn't agree with my little baby.  It's a really hard transition to make because even the slightest trace of dairy seems to impact him (who would have thought dill pickle potato chips would have milk in them?!)  And it's summertime and who doesn't love ice cream in the summer?  But I am pretty committed to cut it out.  Because this recipe did contain milk, I only had about 2 bites.  Normally I would have had much more than just that.  I am planning on sharing the remainder of this dish with some neighbors and friends over the next day.  Normally if I know something has dairy, I would just avoid it, but for the recipes here, I will still sample them.  However, my portions will be limited to a bite or two.
Posted by Summer at 9:06 PM