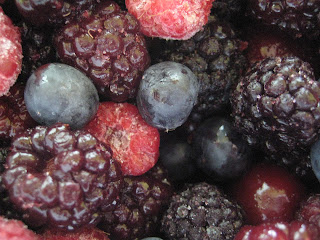 I was putting off making this one because I felt like I didn't have a good large skillet to make it in. I kept thinking of what I would do and in the end, I used the only skillet that had big sides and a lid.  I thought it would be too big, but this recipe has a lot of fruit. 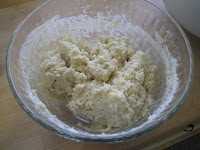 To begin I used whipping cream instead of half-n-half for the biscuit part.  I didn't think it would make a huge difference.  They came together really easy and I even thought about using this biscuit mix for something else (like a muffin base or something). 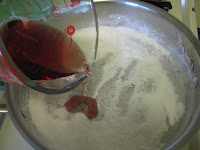 Then it was time to make the fruit mixture.  The recipe calls for 4 cups of cherries and 5 cups of mixed berries like blackberries, blueberries or raspberries.  I ended up using about 2 1/2 cups of cherries and about 6 1/2 cups of frozen blackberries, frozen raspberries and fresh blueberries.  Because some of the fruit was frozen (I did partially thaw it), I used more cornstarch.  But in the end I think I should have used a little bit more.  The recipe also called for a half cup of juice.  I had cranberry on hand, so I used that.  While the fruit was cooking, it smelled like my favorite berry pie that I like to make - especially during the summer.  I think in the future I will use juice with the berries in that pie instead of water. 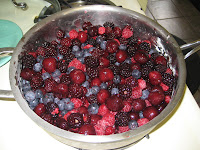 Anyhow, I put the biscuit dough on top of the fruit and covered it.  And it baked and baked and baked on the stove.  For probably a good 50 minutes.  The biscuits were just not looking done.  I finally uncovered it and that still didn't help.  So then I threw it in the oven and after about 10 minutes, I just gave up and declared them done!

I really liked this concept.  Especially for the summer time when it can get really hot around here.  I love desserts with a cakey/crust, but sometimes turning on the oven gets the house way too warm in the summer.  I loved the taste of this, although I wish the biscuit part was more done. Was it the whipping cream instead of the half-n-half?  Or was my skillet too big?  I do want to try making these again.  The fruit filling is so good and dessert enough all by itself! 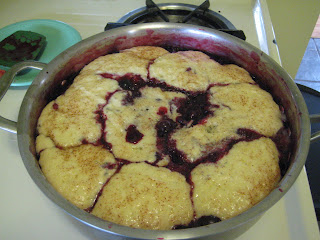