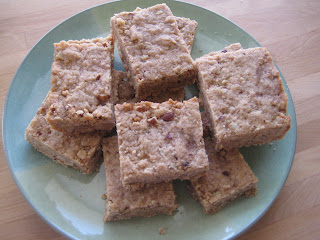 So it's only the first week of March and I am on my third recipe of the month!  I guess you could say I have been on a baking blitz!  Usually it's the end of the month when I am trying to fit in all the recipes, but we have a big birthday coming up, so I wanted to get this stuff out of the way, so I can focus on making an orange dinosaur cake!

Anyhow - I was hosting book club this week and decided to go with the theme "breakfast for dinner" and I thought the Cinnamon-Hazelnut Shortbread pair perfectly with the food.

This shortbread is very easy to make.  It literally took me minutes to pull together.  First you need to finely chop up some hazelnut.  I brought out my  handy-dandy nut chopper and quickly ground them up! 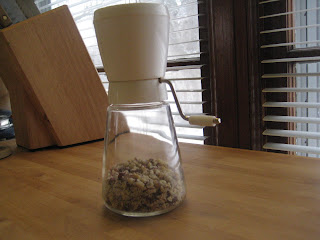 Next up you cream the brown sugar and butter, and then stir in the flour mixture and nuts.  Super easy!  The mixture is dumped into a pan (non-greased - love it!). 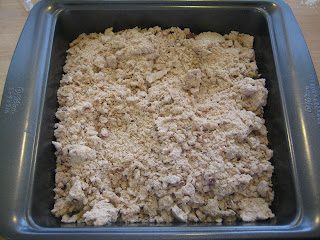 Beth suggests using a glass to get the mixture evenly pressed into the pan. 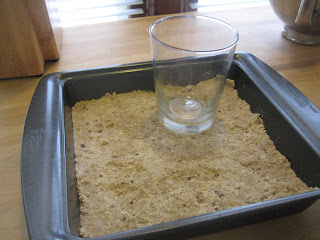 Mine baked for about 28 minutes.  It was suppose to be done when it's golden, but that is hard to tell since there is brown sugar and cinnamon in the shortbread.  Mine could have probably baked for a couple minutes longer, but it was still fine.  Then the recipes calls to score the hot shortbread so it is easier to cut when cool. 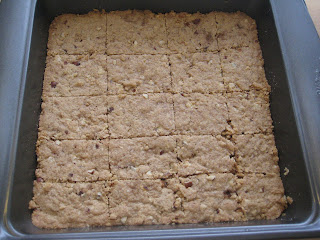 As you can see, I do a terrible job of making even pieces.  That's not actually such a bad thing, since some people want smaller pieces and other people prefer larger ones! :-)

The gals at book club loved the shortbread and I did too.  It's so easy to make.  I loved the flavor the cinnamon added to this.  My husband tasted some after the ladies had left and commented that he should have tried some sooner as he went back for seconds.  It's not overly sweet, but so buttery and yummy!  I can't wait to try this with some coffee! 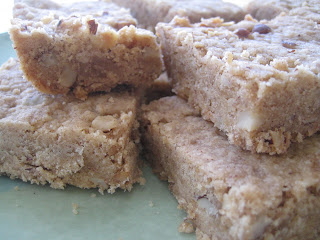