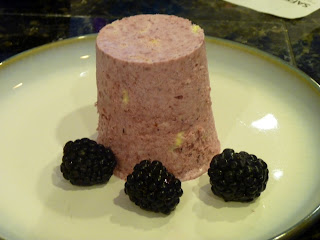 First things first, mommy brain is clearly kicking into high gear as I made the wrong recipe this week. Fortunately, it is one that was scheduled for this month. I just flipped the weeks around. Ug.

At least the good news is that I got what I considered to be the "hard" one out of the way. This wasn't terribly difficult as far as skill level goes, but boy were there a lot of steps and prep involved! Oh and lots of dirty dishes - lots and lots. I generally like to clean as I go, and I couldn't keep up on this one! LOL!

For this recipe, we had an option for what kinds of berries to use. I opted for 1/2 blueberries, 1/4 strawberries and 1/4 blackberries. I already had the blueberries and strawberries on hand, so the only extra ingredients I had to get were the blackberries and whipping cream. Making this dessert while 7 months pregnant was an interesting experience. At this stage, I've recognized I need to take a lot of breaks from standing, and with all the steps in this recipe I wound up bringing a chair into the kitchen to give my back a break! I was also very thankful I have 2 Kitchenaid mixer bowls. This is the first time I've put them both to use for the same recipe! I'm also thinking twice about having no metal bowls (outside of the mixer bowls). Whenever I need to double boil something, I use the double boiler that I have. The problem with it tho is that it has a round bottom - I can't set it down flat on the counter which can be a pain sometimes. I managed to work around it today tho.

Whisking over the double boiler 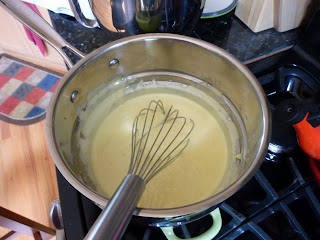 Overall, it took me about 90 minutes to complete this recipe, and I'm glad I made it on a weekend day. I'm not confident I did everything right on the egg portion. While having it on the mixer, it never really doubled in volume, but I did seem to have enough to sufficiently fill the cups. I also ended up with about twice as much berry puree - not sure how that happened!

Beating the egg mixture while it cools 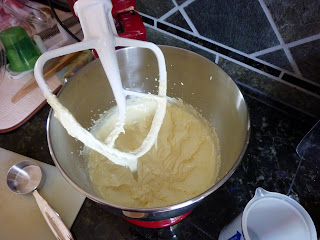 Folding together the whipped cream, berry puree and egg mixture 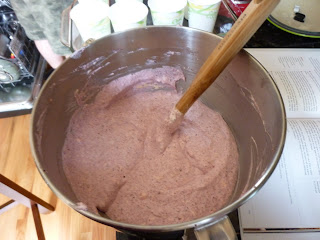 I let these set up in the freezer for about 6 hours. Sadly, I'm not sure I folded the cream, egg mixture and berries enough. They seemed to have the right texture and firmness, but something just didn't seem right. I could see an awful lot of the egg mixture (you can see it in the very first picture), and I felt like I could taste the sugar granules. I had the egg/sugar mix on the stove top for the full 10 minutes, but I don't think I was consistent enough in my whisking.

Hubby and I both thought the flavor of this was good and that it looked (mostly) like it should, but I don't think I'll try making this one again. It turned out well enough, but it was just a bit overwhelming with all the time and effort that went into it.
Posted by LisaD at 10:58 PM