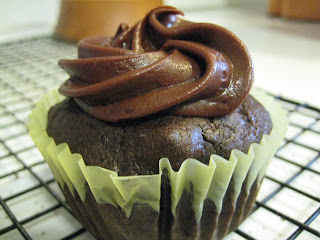 This week's recipe was specifically requested by my friend Matt who so enjoyed the Dark Chocolate Pudding.  He was flipping through the cookbook that night and saw these cupcakes.  Since he loves all things chocolate, he definitely wanted to try these.  I knew that we were going to see him this weekend, so I purposely picked to make the cupcakes this week.

Probably the most difficult thing about this recipe is brewing the coffee.  In fact, after I got started with the recipe, I thought that I should have doubled it.  But since the butter and eggs needed to sit out to room temperature and I was short on time on Friday, I just went with the original recipe amounts.

I did end up with more than just 12 cupcakes (I had 16 total) and I didn't think to adjust the baking time.  In hindsight I should have probably only had them bake for about 16-17 minutes instead of the 18 minutes.  They still were super tasty, but just a tad bit dry for me.

As I mentioned earlier, I was running short on time, so after debating about how to frost these, I sent my husband to the store for canned frosting.  I picked chocolate because why not make them as rich as possible?  Beth's suggestion in the cookbook to just dust them with powdered sugar, and in the future I think I will.  The cupcakes are very strong in flavor.  I could taste the coffee in them, but I like coffee, so that's not a bad thing.  I look forward to baking these again in the future!

And as for Matt - he thought these were great!
Posted by Summer at 7:53 PM