I think I should start this post by apologizing to Lisa.  If I had really known how much work this was going to be, I would have never picked this while she was pregnant!!!!  This recipe was definitely one of the more challenging ones - not so much in the skill level, but in all the steps. 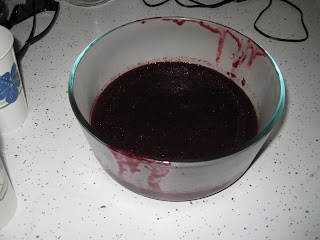 Unlike Lisa, I don't have a weekend to complete this recipe because we are headed out of town for the 4th.  I decided to break up the steps rather than just making the recipe all at once.

I made the fruit puree and the whipping cream ahead of time.  The first thing I did was the fruit.  It was sort of a disaster.  I don't have a big food processor, and it's stored away, so I don't use it much.  The fruit started leaking out everywhere while I was using it.  And then the baby started screaming, so I had to stop mid-puree.  And then I realized just now, that I never did measure out the 1 1/2 cups, so who knows how much ended up in the final product!  But the whipping cream went much smoother, and I put both the fruit and the cream in the fridge until after dinner. 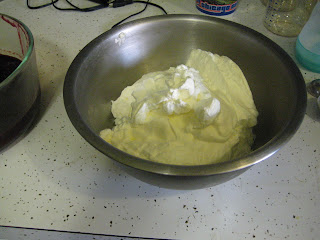 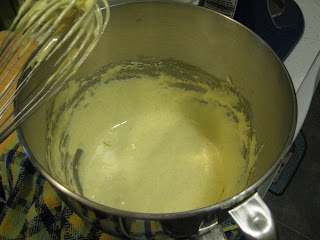 I also had trouble with the egg mixture.  I whisked for 18 minutes (the recipe called for 10) and the sugar never dissolved.  I finally decided to move on to the next step which was to mix with the mixer for 8 minutes.  The volume was suppose to double, but it didn't at all.  I wasn't sure if I should have used the whisk attachment at this step or the paddle, so I went with the paddle.  I wonder if that was a mistake.  The consistency of this mixture seemed really sticky and if anything I feel like it lost volume.  It was sort of difficult to fold the whipping cream and the berry puree into this mixture.  It didn't seem to end up mixing so well, because like Lisa, you could see some of the egg mixture in the final product. 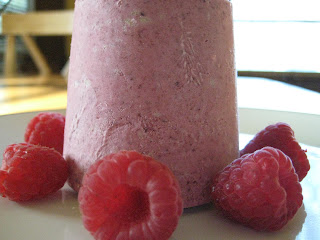 The taste was ok.  It was along the lines of a sherbet.  I actually had it for breakfast this morning because I finished too late last night.  For all the work that was involved I just don't see making this one again.  I could taste the sugar that never dissolved.  I wonder why it never dissolved, but in hindsight, I actually think the water wasn't hot enough while I was whisking it.  I would have to say that despite everything, I am pretty proud that we actually made this recipe.  Normally this would be the exact thing that I would skip in a cookbook and now we get to actually cross it off the list!

This recipe also triggered a new thing for this project.  When talking with Lisa this week, we decided that it was actually fun for us to make different recipes in the same week, because we were able to give each other our thoughts, tips and suggestions on the recipe that we made.  So - starting with our next picks, we will be making different recipes each week.  We'll still do four picks at a time and we'll each make those four recipes, but just during different weeks.
Posted by Summer at 10:05 AM