Since Lisa and I have been friends for years, I have been lucky enough to eat the butterscotch pie that she wrote about in her post.  It is truly delicious and she has even given me the recipe for it, however, I have never had the chance to make it.  I was planning on making a pie with this pudding as the filling, but when I asked my husband "Pie or just pudding", he responded with "Pudding?"  Really in the long run - I am glad that I didn't make the pie.  It's been a long week dealing with a sick baby, so the pudding was definitely the easier route.

I haven't really made much pudding from scratch before, but I really liked the dark chocolate pudding we made earlier in this project.  I was looking forward to trying this recipe.  And my husband's drink of choice is scotch, so of course, I included that ingredient.

As I mentioned above, this has been a rather long week for me.  It really showed on Friday night as I was getting ready to make this recipe.  First of all I looked at the amount of cornstarch that I had in my pantry and deemed that it was not enough!  My husband ran to the store to get me more.  Then while he was out, I realized that I didn't have enough whipping cream, so I had to call him and ask him to pick up some of that (of course he had already checked out and had to go back inside the store!)  I started measuring out everything, so that when he came home, I would be ready to roll.  As I was measuring out the cream - low and behold - I had enough!  Didn't I feel foolish?  Fortunately my husband was a good sport and didn't mind when I made that announcement.  So then I went to measure out the cornstarch, after opening the new one, and discovered that I also had enough of that!  I seriously felt like the biggest idiot!  Perhaps it would be a good idea to start measuring out everything before sending my husband to the store!!!

Other than those issues, it came together pretty easily.  I had everything ready to go when I started.  I had to seek the help of my husband once more when pouring the hot mixture into the egg yolks.  I wanted to be able to whisk as fast as possible, so the eggs wouldn't scramble. 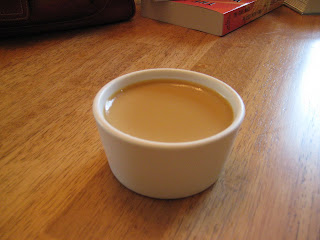 The overall consensus about this pudding is that it was sure rich and creamy.  I must have not let it thicken enough, because it was pretty runny - even after being in the fridge.  We also thought that there might have been too much scotch in it.  Next time I will just try a tablespoon instead of two.  I definitely plan on making this again and maybe next time I will even put it in a pie crust!
Posted by Summer at 5:04 PM