Fun With Layer Cakes - by Lisa

I'll be honest and say that baking and decorating cakes is not my forte. I generally leave that category to my very talented sister, Karla. However, every once in a while I get brave and/or ambitious and take a shot at doing a cake. One style that I am particularly smitten with is what I call the Magic Layer Cake. I think I came across the original entry from Whisk Kid via someone's post on Facebook. That particular version called for making 7 layers - each one a different color of the rainbow. The really neat part comes in when you cover the entire thing in white frosting. Unsuspecting guests are awed when you cut into the cake and reveal a very colorful inside!

I really wanted to try it, so at Christmas two years ago, I did a red and green version. It was my first time ever making a layer cake and also making the accompanying Swiss meringue butter cream frosting. (Whisk Kid's directions were fantastic!) For that cake, I used her recipe for the cake batter and then tinted half the batter red and half green. This was also when I was first introduced to the gel paste food coloring which changed my baking life forever! :) I made four total cakes and covered the whole thing in white frosting. The kids (my own and my niece and nephew) didn't see the cake in progress, so they had no idea about the inside! I had some red and green sprinkles and told them they were "magic" sprinkles that would change the inside of the cake. They each took a turn sprinkling the cake before it was cut. The reaction to the colors inside was awesome! And the whole thing tasted so yummy too. 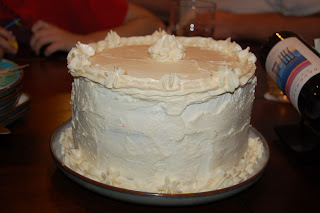 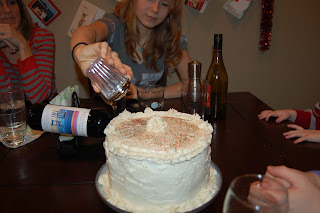 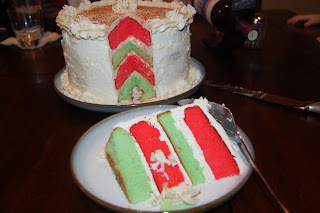 Since it had been awhile since I made that cake, I decided to do something similar again. This time it was for my mother-in-law's birthday this past June. I made hers in orange and yellow and went with the simpler regular butter cream frosting. No sprinkles this time around, but like before the inside was a surprise to all! 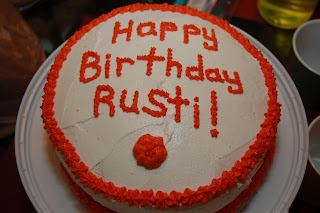 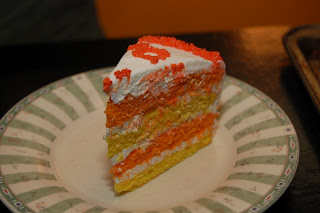 I really like making this cake because it is so easy to customize for whatever occasion you need. Graduation colors, holiday colors, favorite colors...anything at all! You can also flavor the frosting if you so desire or even make it another color too.
Posted by LisaD at 8:00 AM