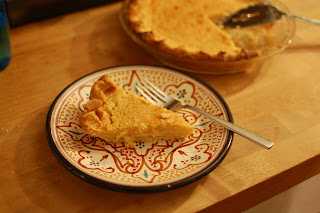 It's pretty obvious that we're getting close to the end of this cookbook and to all the recipes we put off because they didn't appeal to either of us for one reason or another. For me, this is one of those recipes. :P I've never had a slice of buttermilk pie before, nor am I even sure I'd heard of it so I've been hesitant about finding out how this one will turn out.

Making this pie was pretty straightforward. Beth suggests that you use a frozen pie crust (for which I am immensely grateful given my track record with pie crusts), but I decided to try something a wee bit different. I'd heard Trader Joe's makes a killer pie crust, and I've had a box of two sitting in my freezer for several weeks. I finally pulled out one of them, and used it for this recipe. All I had to do was let the rolled crust thaw and then use as needed. This recipe also requires that you "blind bake" the pie crust so that you don't end up with a soggy bottom. (Hee!) She suggests that you use uncooked rice to keep the crust from puffing, but instead I was thrilled that I finally got to use the pie weights that I bought ages ago! :) 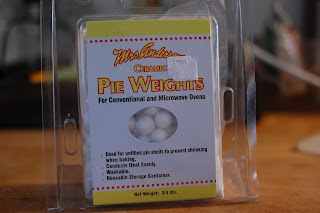 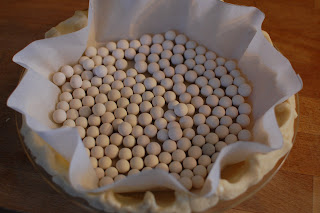 As my oven is a bit testy, I noticed that the edges of the pie were already beginning to brown during the blind baking session. So I used my pie crust shield to slow that process down. I'm pleased to report the plan worked!

While the crust was baking, I put together the rest of the recipe for the filling. I was a little concerned that the butter/flour/sugar/zest mixture looked dry whereas the recipe mentioned it should have no lumps. I switched to the paddle attachment but that didn't seem to make much difference. I switched back to the whisk and finished up adding the remaining ingredients. It was much more liquid than I expected, so I was hoping it would firm up while it baked.

So I checked it at 37 min and it was definitely done. Any worry about it not firming up was completely unwarranted! However, there is a good chance I overbaked it since the pie itself was almost cake-y when I pulled it out. It was supposed to jiggle a little, but there really wasn't any jiggle at all. I do have to say, this pie made the whole house smell so good!! I was getting eager to have a taste. 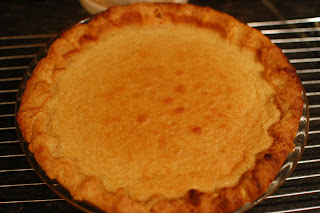 I left it to cool and then placed it in the fridge for another 2 hours. Finally, it came time to have a slice, and I have to say I was very pleasantly surprised! It was lemony and sweet and very custard like. I also liked how the TJ's crust turned out. Overall, I am pretty happy with how this recipe turned out. I never would have tried it on my own, so hurray for something new!
Posted by LisaD at 10:36 PM