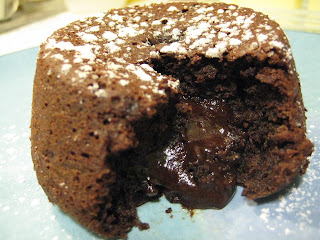 "This is my favorite thing you have made so far" my husband told me tonight as he was eating his cake.  I have to say I was a little nervous because he isn't a big sweets or chocolate person, and I didn't think he would like these cakes at all.

I was very excited to try this recipe as I love all things chocolate - especially chocolate cake.  Over the years, I have seen many recipes for this cake, but have never made it.  The main reason is that clearly you have to eat the cake right after it comes out of the oven and trying to get the timing right seemed difficult. However, I was excited to see in this recipe that you can make it ahead of time and then put it in the fridge to bake later - sweet!

I thought this recipe was once again pretty easy.  I would say the biggest pain was buttering the little ramekins.  I originally thought the ones I had were too small, but I had 8 of them, so I was just going to bake them for less time.  As it turns out, they were the right size, so I only made 6 like the recipe called for.

I didn't have instant espresso powder, but instant coffee, so I used that instead.  In fact, I didn't even think that it would be an issue, but I wonder if that could have altered the taste of them.  It's an optional ingredient, so the next time I think I would leave it out.

I ended up baking these for a minute less than it called for and unlike Lisa, I wasn't worried about the eggs being cooked, even though I probably should be (2 weeks, + or - a few days till baby arrives!).

As I mentioned before, I loved being able to prepare them ahead of time and then baking later.  I ate mine before my husband, so I only popped one in the oven.  This helped because if the baking time was off, I could have adjusted it for his.  And now tomorrow I can make the rest and have a tasty dessert all over again!  We didn't have any ice cream on hand, but I might just have to pick some up tomorrow.

I will definitely make these again.  In fact, I really want to make this for my dad, and maybe add some raspberry sauce to go with these cakes.  One of the other reasons why I like these so much is the portion size was perfect.  I think this is my favorite recipe to date!
Posted by Summer at 9:07 PM