I want to start this post out with a couple of notes before I get into the Hello Dollies.

First, this past weekend Lisa visited me and she brought a slice of her Peanut Butter Banana bread. We did a little taste-test. Even though they looked different, they tasted the same. I was surprised, maybe because of the different appearance, but my husband pointed out that it shouldn't be too shocking since we followed the same recipe.

Second, Beth Lipton, the author of You Made That Dessert found our blog and left us a comment! I had always planned on sending her a note at some point to tell her about our little project, but figured I would wait until we were further into it. I guess this means that no matter what - we can't stop now! 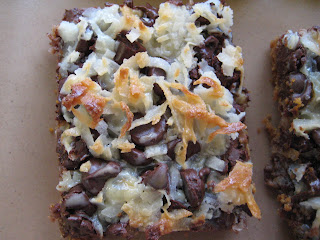 Onto the Hello Dollies! Unlike Lisa, I never really had these growing up. I have seen them lots of places, but just always figured that they were hard to make. I have no idea why I thought that, because as Lisa mentioned, these were the simplest recipe yet!

The only thing I changed was pecans for the walnuts. I really thought I had walnuts on hand, but I only had pecans. Fine by me, because I like pecans better. I also toasted them before I chopped them. After reading Lisa's post, I decided to decrease the amount of salt to just under a teaspoon.

I think I might have slightly over-baked the bars. I had them in for 25 minutes (recipe stated 25-30 min baking time), but I should have probably checked on them a bit sooner. I also cooled them exactly for 20 minutes and then cut them. I didn't have any problems getting them off of the foil.

I like these bars, and I was actually looking in my cupboards to see what else I could add to them. Ultimately, I decided to stick to the recipe, but next time I will try the butterscotch chips. I think in the future I will use even less salt or omit all together. The salt in the crust just didn't taste right to me. Of course, I love all things sweet, so the sweeter, the better! 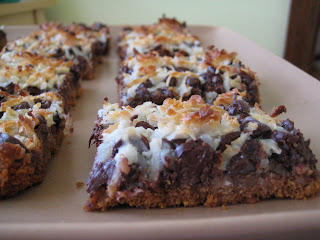