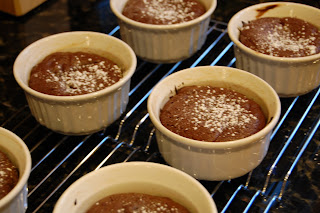 I felt like this recipe might deserve a little extra attention, so I opted to wait for my hubby to spirit away our little guy for an hour or so before settling into this week's project. I am glad I waited, because there were a decent number of smaller steps that were definitely better served by having my full attention.

Overall, I'd say this was a medium-level skill requirement. For melting the chocolate, I opted to follow Beth's helpful tips that she supplied in a comment on my prior entry. While I generally trust my cast iron cookware to do a smooth and even job, I didn't want to take any chances, so out came the double boiler! I think it worked really well, and the butter and chocolate melted down at a nice slow rate. Incidentally, chopping the chocolate was much easier this time around. I think it was partly because I used all Ghiardelli chocolate this time (much thinner bars) and partly because I wasn't hurrying along.

I do think I might have made an error in my process. I'm not sure I whisked the egg/cream mixture long enough. As I was trying to fold the chocolate and egg mixture together, I noticed the egg mixture was on the runny side so I wasn't folding so much as I was stirring. It was at that moment I realized that if I had whisked them longer, it probably would've yielded a slightly more solid mixture that would have allowed for better folding. Lesson learned for next time! :)

I ended up letting them bake for about a minute longer than called for. I was a little nervous about how to tell when they were done and also a bit paranoid about making sure the eggs were properly cooked. (Expecting baby #2 at the end of summer!) As a result, the center was slightly more cooked than it should have been. The top center was a little looser, and the rest of the middle was moist but not molten. Another lesson to remember for next time! 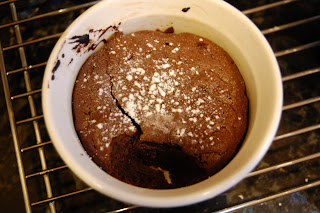 The cakes were definitely yummy right out of the oven. Unfortunately I didn't have any ice cream on hand to serve with them. Doh! I'm sure peppermint ice cream would go real nicely with them. :) I think next time I might try Beth's suggestion for swapping out the bittersweet chocolate with semi-sweet. I generally don't care for dark chocolate - my sweet tooth is just too strong!!

ETA: I did not use the instant espresso powder that was an option for this recipe. I really really really dislike anything that even has a hint of coffee or espresso flavoring. Can you tell I am not a coffee drinker? ;) I would bet that most folks who are coffee drinkers would not have noticed the addition of the espresso powder, but based on prior experience I know I would've been able to tell. :P
Posted by LisaD at 7:26 PM