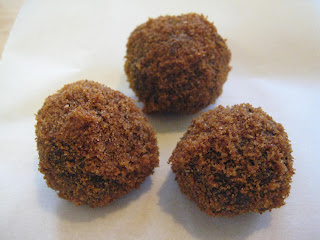 I was excited to make these because it was an excuse to make the gingersnap cookies again!  Other than that ingredient, I had everything else on hand to make these.  The kids and I were invited to a friend's house for Thanksgiving (husband had to go out of town), so these seemed like the perfect thing to bring to Thanksgiving dinner. 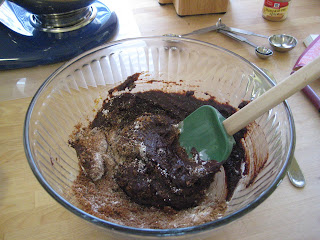 Since my little guy is obsessed with all things in the kitchen lately, I thought maybe his fear of the food processor would be behind him.  Unfortunately that is a big no!  The minute I pulled it out, big tears ensued, so I had to wait until he was done eating and in another room to grind up the gingersnaps.  I used 20 cookies and had more than enough crumbs - way more than the recipe called for, actually.  I was a bit bummed because that meant less cookies for us to eat! 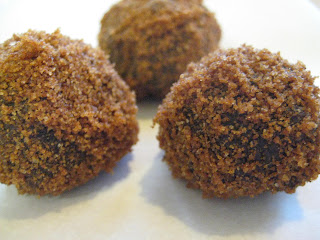 Making these was super easy.  I discovered that the chilling time (10 minutes) way not nearly enough time.  I ended up having the mixture in the fridge for about 25 minutes and then in the freezer for another 6 or so before I could finally roll them into balls.  I got 23 truffles out of the recipe.  I wasn't in love with these which is sort of funny since I love chocolate, pumpkin and gingersnaps.  I guess just not a combination of all three.  However, they were a big hit at Thanksgiving, so I could see making them again for a party or to give away.

I also want to note that the recipe only calls for 1/4 cup of pumpkin.  I didn't know what to do with the rest, so I put it in the fridge and a couple of days later, I found this recipe for pumpkin muffins which was super easy and very yummy!
Posted by Summer at 1:17 PM