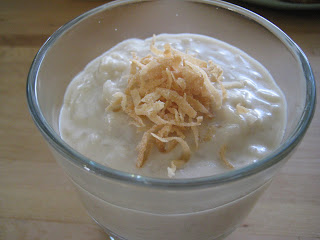 I can't remember if I have ever had rice pudding before.  I have to say, I wasn't overly excited to make this recipe.  I do like coconut and I have liked the pudding recipes that we have made so far, so I figured I probably would like this one too.  I do like making pudding, because it's tasty and so easy to make.  And since it's easy, I was all about trying to make this one this week.  The little ones haven't been sleeping the greatest, so I am a little behind myself in that area. 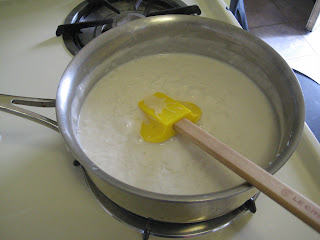 This dish has relatively few ingredients and the only thing that I had to purchase was the rice and coconut milk.  It took a total of about 30 minutes to make.  I think I could have let it cook for a couple of minutes longer.  Basically you put everything in the sauce pan and let it cook for 25 minutes.  While it was cooking, I toasted coconut in my toaster oven.

After it cooled for 15 minutes, I spooned some into a bowl and topped with the toasted coconut.  I wanted to taste it warm.  I really liked the taste and the texture.  My son tried some, after a little convincing, and at first he said "mmmm . . ." and then he said "yummy!"  I tried it again tonight after dinner and it still tasted good chilled.  I honestly can't decide which way I like it better.  I am now really excited to try the regular rice pudding, perhaps next month :-) 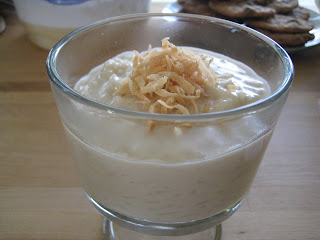