Well, we were doing well with alternating recipes until the end of the month here. Whoops. :) Summer gave me the great idea to make these with my 2 year old, so that's just what we did! It was a fun and easy recipe, and Caiden loves being involved. I don't often randomly add ingredients to recipes, but this recipe practically begs you to do so! It was fun going thru the pantry and deciding on what to add. I was also very curious to try these cookies out and see how they compare to the recipe I grew up on - my mom's oatmeal raisin cookies.

In addition to the oats, chocolate chips and raisins, I also added craisins and chopped pecans. I was going to add coconut as well, but decided that the bowl was already getting pretty full. I wound up with a lot more cookies than I expected which is always awesome. :) They also didn't spread out as much as I thought they might since the recipe suggests spacing them 2 inches apart on the baking sheet. I also forwent the parchment paper and just baked them directly on the cookie sheets. They seemed to do just fine on them. :) 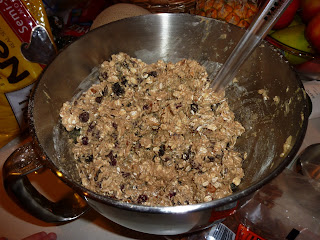 Initially I thought they tasted just ok. But by day 2, I found I liked them a lot better. Maybe I am just super used to my mom's recipe, but these definitely are a nice alternative. Next time I'll try adding in some butterscotch chips and see how they turn out. :) 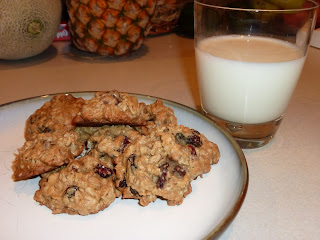