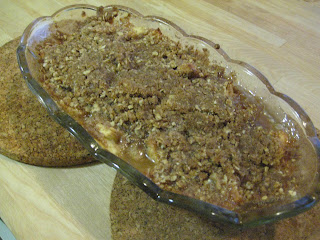 While I was the one that came up with our flexible scheduling for baking recipes (we pick the recipes for the month and then we decide when we want to make them), and I do believe it's a good idea, it wasn't a good thing for me this month.  At the beginning of the month I put off making the Apple Crumble and then it was the middle of Nov - just in time for my hubby's b-day and then Thanksgiving follows immediately.  Talk about bad timing on my part!  Way too many sweets in the house (although my dad probably would think that no such thing is possible!)

Lisa gave me the brilliant idea of just making half the recipe.  That turned out to be the perfect thing!  Especially because this recipe is hard to share unless you have people over to help eat it.  It's not something that would really travel well to my husband's work like bars, or cookies or cake.

So cutting it close to the end of the month, yesterday afternoon I made just under half of the recipe.  The original calls for 5 apples and I did just 2.  I had the perfect size dish* and the crumble topping was really easy to cut in half.  It baked for about 40 minutes instead of the 55.

I have to say that I really liked this crumble a lot!  I am not sure how much sugar I really used when combining with the apples, but it wasn't a lot, so they were nice and tart and the topping was crunchy with a touch of cinnamon.  I think this will replace my go-to recipe for apple crisp.  The amount was absolutely perfect for me and my husband!  I feel bad that I put off making this one for so long!  Here's hoping that December's recipes are done sooner!!!

*Anybody recognize that dish that I used?  Maybe someone from Lisa's family?!!!
Posted by Summer at 10:19 AM