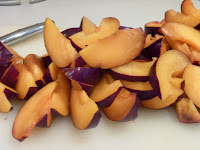 Making the plum galette was extra fun because Summer was in Seattle for a visit!! Hooray!! :)
I was a little concerned about making this because I suspected we were nearing the end of in season plums. I wasn't sure if my grocery store was going to have any in stock! Fortunately, I lucked out and got my hands on some, and they were all in good shape too. Ripe, but still firm.

I decided I would make this the weekend Summer was here so that we could both sample it. I had spent a busy day in the kitchen working on dinner, so I was glad to find this recipe very easy to make!

And can I just say? Frozen puff pastry is my new favorite thing. It is so easy to work with and tastes so yummy! You may not know this, but me and pie crusts generally don't get along so well. I might start using this on days when I just don't feel like fighting against the pie crust gods. Anywho, the most time consuming part of this recipe was slicing up the plums, but that was fairly easy - more so because they weren't too mushy.

Unlike Summer, I'm not so good about reading ahead in recipes which can sometimes lead to problems. Case in point, the recipe called for rolling the dough between two sheets of parchment paper. For rolling out dough I almost always use waxed paper (cuz I'm cheap), so I figured I'd do the same here. Fortunately Summer noticed that the bottom layer of parchment paper does not get discarded and instead goes into the oven with the galette. Can't do that with the waxed paper! So she swapped that out for me while I was working with some of the ingredients.

Since I had to get this in the oven by a certain time, I didn't have the chance to line up the plum slices in neat circles. I kind of wish I did, because it would have made it look so much prettier!


Before going into the oven 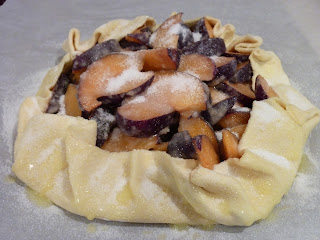 And on the flip side 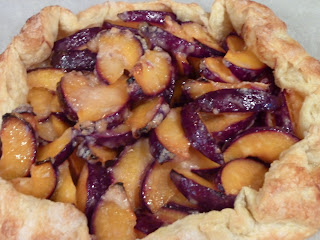 After dinner, we dug into dessert. I think Hubby put it best when he said: "It's a mouthful of win!" :) Yes, we all thoroughly enjoyed this tasty treat! Summer mentioned that it would be neat to try this with a different variety of plum. I might even try it with pluots next year!


Best Friends Baking - Together in Seattle! 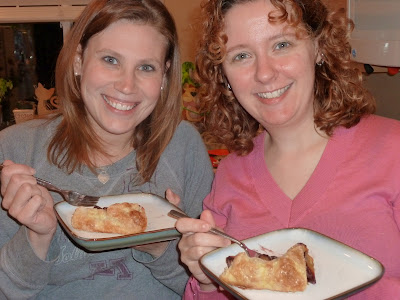