We're back!  We decided to start out a little slow and only pick two recipes for the month.  We are changing things up a little bit again.  This time, we are each going to have picks for the month and then we can independently decide which week we are going to bake them.  Flexibility is something that you learn as a parent, and that's how we are going to roll on here too!  After we decided on two picks for this month, Lisa came up with a fabulous idea!  Next week I am flying out to Seattle to meet her latest addition and to spend some time with my godson (her firstborn), so we thought it would be fun to bake a recipe together!  It might be one of us distracting the kids while the other one bakes, but I am sure we will figure it out!

Anyhow - enough housekeeping - on with the baking!  Both recipes we chose this month use puff pastry.  For some silly reason - I have always been scared of puff pastry.  After making this recipe I have no idea why!  It's so easy to work with and you don't have to do a thing but thaw it! 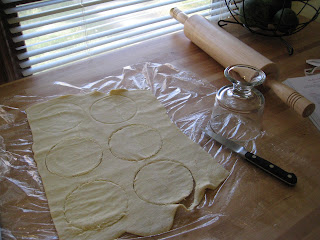 Funny thing about that thawing it piece.  Beth is a huge advocate of reading the recipe twice before you start baking anything.  She puts this in her book and I have seen her mention it on other places.  Usually I study the recipes a couple of days before attempting them.  This one was no different, but for some reason, my mind completely ignored the word thaw!  During the baby's morning nap, I got everything ready to make these.  I sliced the apples (I used an apple peeler/corer thing because I am terrible at pealing by hand), got the butter melted, oven preheated - I mean everything was ready.  And then I went to the freezer and took out the puff pastry.  Basically I had to turn off the oven and put away some of the stuff until the next naptime rolled around.  You simply can't roll out frozen puff pastry.  It just won't work!  Lesson learned the hard way! 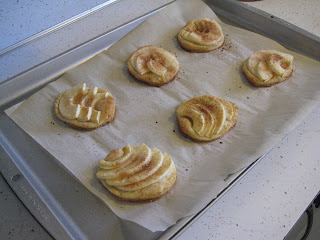 Other than that little issue, I was able to assemble these quickly.  My apple slices weren't as thin as the recipe called for and my apples were slightly large as I was trying to use up what I had on hand (a Golden Delicious and a Cortland).  Fortunately that wasn't an issue at all in the outcome.  The apples baked up soft after 20 minutes and the taste was so amazing!  It's like a little apple pie without all the work of a pie crust!  I can not wait to make these again!
Posted by Summer at 2:33 PM