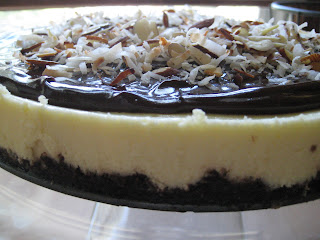 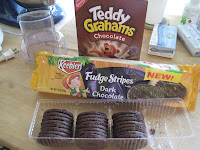 Here it is - my second to last recipe - I can't even believe it!  I had a lot of problems trying to find two of the ingredients for the recipe.  The first was the chocolate graham crackers for the crust.  I know I have seen them before, but for the life of me, I couldn't locate them these past couple of weeks.  I decided to settle on some fudge stripe cookies.  But I wasn't sure how they would grind up, so I bought some Chocolate Teddy Grahams as well.  As it turns out - the cookies were just fine.  And I decided instead of leaving the almond slices whole, since I had the dreaded food processor out, I would grind them up too!  The crust came together quickly and easily. 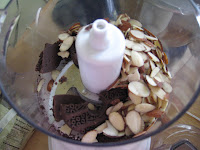 The second ingredient that I struggled with was the cream of coconut.  I didn't realize at first that the recipe called for this, until after I had already bought coconut milk.  I did some research and looking and looking for cream of coconut to no avail.  I decided to just use the thicker part of the coconut milk and hope for the best.  Other than that, the filling was super easy.  I do want to mention that I am currently using homemade vanilla from my baking partner - Lisa!  She gave some to me this winter and it is wonderful!!! 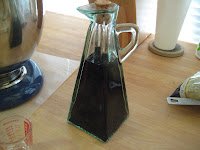 Since we have made two cheesecakes now, I'm trying to figure out why I always think that cheesecakes are so hard.  The cheesecake crust and fillings are typically really easy, but I think it's the baking instructions that are intimidating.  First - you have to wrap the spring pan in two layers of foil and then you have to bake it in a warm water bath.  It's not difficult, just time consuming. 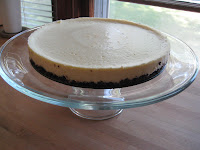 My cheesecake baked for about 65 minutes.  It seemed pretty firm in the oven, although I still thought it could have baked slightly longer.  I let the cheesecake cool and put it in the fridge overnight.

Today I made the topping.  Toasted coconut and almonds with a chocolate ganache - yum!  The ganache for this recipe is made with 12 oz. of semi-sweet chocolate.  I seriously considered only using 10 oz, but in the end, I just followed the recipe.  I made sure to slowly heat the cream and coconut milk and whisked it every so often, so it got nice and hot.  I slowly added it to the chopped chocolate, whisking constantly and I was able to get all the chocolate to melt. 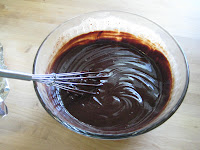 Like Lisa, I was really pleased with the outcome of this dessert.  It looked so awesome and just like the picture.  I totally copied Lisa's shot :-) 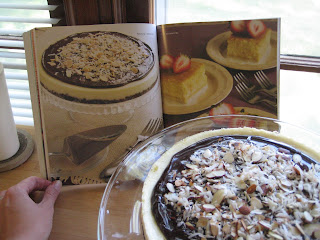 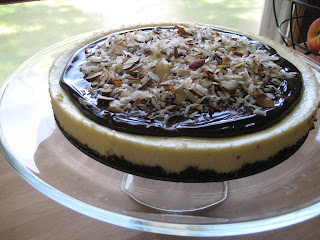 This is a really yummy cheesecake.  My husband liked the cheesecake and crust, but wasn't overly keen on the topping.  My son and I loved the topping! I probably could have let the cheesecake cook a little bit longer, but it was still good!  I would definitely make this again because it is so impressive!

I want to do a quick reminder that there is still one more day left to enter our giveaway!  Just head to this post and leave a comment!
Posted by Summer at 9:30 PM