So it looks as though Summer and I were on the same baking wave length today! I too tackled the Perfectly Simple Pound Cake recipe this afternoon. I would've been done with it sooner, but I didn't realize until I started reading through the recipe that three items were required to be at room temperature - the sour cream, butter and eggs. Fortunately my son was distracted enough with his lunch that I was able to bake in relative peace. 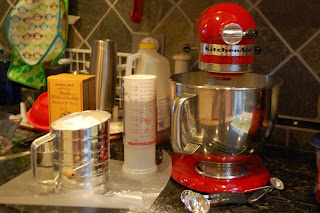 One thing that sort of tripped me up was that the directions instructed you to whip the butter and sugar until very light and fluffy. It said this should take about 3 minutes. I am used to recipes generally being written for hand mixers and therefore converting the time ratio in my head as stand mixers are generally more efficient. Well, after the full 3 minutes, my butter and sugar was light colored but decidedly un-fluffy. I am accustomed to creaming butter and sugar for my chocolate chip cookies and consider myself to be pretty familiar with how this should look. I was wondering if maybe my butter wasn't quite soft enough or perhaps my mixer not as powerful as the author's. In the end, I decided to let it go a little longer, and as luck would have it, the mixture finally started fluffing up! Whew!

I was surprised to find that it took a little over 75 min to bake! And at how tall it got! I could tell it was time to get it out of the oven because I could smell it starting to over bake a little. I thought about making the raspberry glaze that Summer and I talked about (another recipe in the book), but decided to maybe save that for later this week. 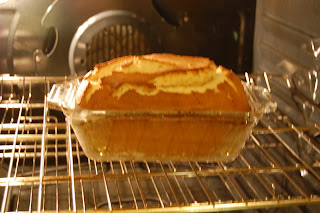 B and I both thought the pound cake was pretty tasty. It was even still a little warm after sitting out for a couple of hours. There was a very small section near the top that still wasn't quite baked all the way through, but that didn't detract from the overall taste. It was quite dense and rich, tho I think I would have preferred a slightly more buttery flavor. I think it would pair quite nicely with the aforementioned glaze, so perhaps I'll make that for tomorrow.
Posted by LisaD at 10:35 PM