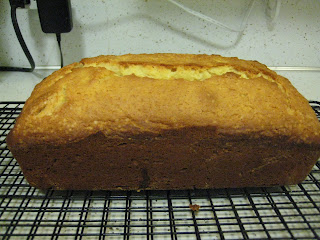 This week's recipe - Pound Cake. I was not confident on how this recipe was going to turn out due to the fact that I am 8 months pregnant and it's winter and I live in Minnesota! Why those reasons? Simple, the recipe calls for 3/4 cup of sour cream - no problem, I had some in the fridge. Oh wait, I didn't have quite enough . . . hmmmm . . . roads are icy today. But ultimately I decided, screw it - I am baking the cake anyway! I have been so tired lately, so that when I actually have some little bit of energy, I need to take advantage of it! So, it will be interesting to see how different my cake turns out from Lisa's. I made it with less of the sour cream that it called for.

This was an easy recipe, but I think that most pound cake recipes are. I have made pound cake several times and typically use a family recipe. It's called Grandma's Pound Cake, but honestly, I don't know which Grandma it came from. The main difference between my Grandma's recipe and this one is the sour cream and the fact that this one is made in a 5 x 9 and not a bundt cake pan.

To be honest, I wasn't impressed with the cake. It was easy enough to make, but the taste of this cake is a little different than a what I think of in a pound cake. I am not sure if I over baked it; I had it in for 70 minutes. When I checked it at 65 minutes, the center wasn't done yet. Uncas, my husband rates this cake about a 5 on a scale from 1 to 10 stating that taste was the main factor. I would have to agree with him. I probably won't be making this cake again.
Posted by Summer at 7:19 PM