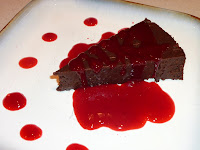 I honestly don't know where I found the energy and drive to complete this final recipe at 39 weeks and 4 days pregnant with 90+ degree temps in the land of no air conditioning, but I DID IT! :D Subconsciously, I worry that now I am caught up, I am going to go into labor any minute now. LOL!

Anywho, I am thankful that this was a pretty easy recipe to make - I was even motivated enough to make the raspberry sauce since Summer's entry made it sound especially yummy! I divided this one into two days - Monday night I made the cake, and then tonight I made the raspberry sauce. As usual, it took me longer than expected to chop the chocolate (Summer, I can't wait to see your technique!), but once that was done, everything else pretty much sailed right along. I might have over beaten the eggs as they ended up pretty fluffy and had lots of air bubbles, but that didn't seem to detract from the cake. As per usual, I omitted the espresso powder but didn't change anything else otherwise. I was also excited to finally use the spring-form pan that I bought a couple of months ago. I've been wanting to try out a cheesecake, but I've just been too busy to squeeze that in! 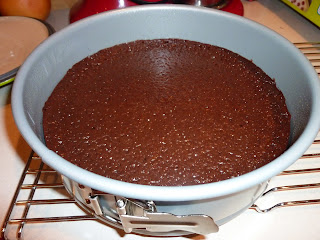 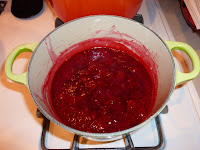 Making the raspberry sauce was real easy, and it added a very nice touch to the cake. I tried out my Cuisipro Decorating Pen with the sauce, and I am sad to report that it didn't do as well as I'd thought. Oh well, it might just take some practice! Hubby and I both dived into the cake tonight after dinner. We both thought it was pretty tasty - very moist and almost icing-like in its consistency. I think I was expecting a slightly firmer cake with a little more sweetness, but this could also be due to my cheaping out on the chocolate. Normally I would buy the Ghirardelli chocolate, but price persuaded me to go with Hershey's and Baker's chocolates. I am pretty sure it would have been a richer cake with the better chocolate. I definitely enjoyed the contrast of the tart raspberry sauce against sheer chocolate. It would be neat to see how it would taste with some whipped cream too. All in all, a yummy dessert and one that was pretty easy to make! 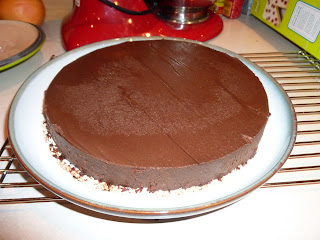